Hundreds of vituperative emails. Threatening phone calls to my home. Hate mail that arrived both at work and at home—it was overwhelming.

That was my first brush with a right-wing maelstrom of anger at an extra credit opportunity I offered to students in my freshman English class in 2015.  My son returned from a deployment in Afghanistan only to find his mother under attack, with campus police walking me to my car after my night classes, and the chair of my department and my dean getting phone calls demanding that I be fired.

My offense was offering extra credit for students to attend—as protesters, observers, or participants—and write about a rally featuring both Democrats and Republicans on the state’s plan to cut funding for the Wisconsin university system. The hate mail and the calls diminished after a time, but the uneasiness remained.

Late last year, it all started up again. With the dubious distinction of being one of the first professors to be named to the Professor Watchlist, there I was again—with my name and email address in the public eye along with a brief description of my crime (no more factual than its initial appearance online).

When I returned to class this semester, my place on the watchlist came with me in a multitude of ways. Speculating whether students in my classroom know I’m on the Watchlist. Wondering whether they believe what they’ve read or heard. Looking over my shoulder as I walk to my car after a night class. Feeling just a little nervous about being in my office when there’s no one else on my floor.

While I didn’t at first take much notice of the AAUP’s online petition of support for professors on the Watchlist, when I saw that over 10,000 had signed it in the first couple of weeks—that was amazing.

That support and the clarity of mission in fighting to ensure that faculty have a voice and protections for academic freedom are why I’m an AAUP member.

Donate to the AAUP Foundation and support the fight for academic freedom. 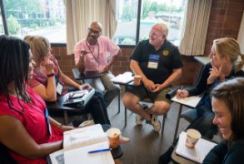 We need to keep our message to students, to fellow faculty, to administrators, and to the public consistent and strong. Education is about learning. It’s about being exposed to new ideas. It’s about debating openly and without fear. Watchlists be damned.