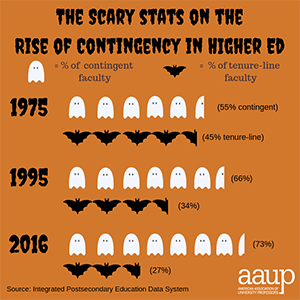 From teacher strikes in West Virginia, Oklahoma, and Arizona to faculty walkouts in the UK, we’re reminded of how activism can breathe life into movements. Thanks to these amazing demonstrations of solidarity and a renewed focus on education and educators in the media, we have an opportunity to remind the public why faculty and higher education matter.

Summer is a great time to get more involved with this work.

Our Summer Institute will be held July 19 to 22 in Durham, New Hampshire. We bring in organizers, data analysts, seasoned campaigners, and issue experts to build your skills as an advocate for AAUP principles, collective bargaining, and higher education. Learn more here.

You can also take the summer to dive into two of our recently released toolkits, one focused on the targeted harassment of faculty and the other on “campus free-speech” legislation.

With a potentially damaging decision in the Janus case expected by the end of June, a strong and organized academic workforce has never been more important. Our collective voice is a powerful force to set standards, protect and create better workplaces in our country and in higher education. Standing together also makes it possible for us to negotiate affordable healthcare, a fair return on our work, and the ability to retire with dignity. To learn more about this case, check out our resources on preparing for the challenges ahead.

National AAUP staff and leaders will be busy this summer as well. We’re working to protect your rights to organize and bargain collectively. When opportunities arise, we file amicus briefs in court cases that impact union rights, academic freedom, and other key issues. We respond to incidents of faculty harassment and violations of academic freedom. And we help chapters organize and grow stronger to face the challenges ahead.