Higher education in the United States is experiencing a crisis in academic governance. Many institutions faced dire challenges in the 2020–21 academic year; for some, the pandemic exacerbated long-festering conditions. At other institutions, governing boards and administrations opportunistically exploited the pandemic. They used it as an excuse to put aside established academic governance processes and unilaterally close programs and lay off faculty members.

That’s the conclusion of a report we are releasing today: Special Report: COVID-19 and Academic Governance.

Read an executive summary or download the complete report.

Visit the AAUP Facebook Page today at 12 ET to watch a brief Facebook Live presentation on the report.

It’s the report of an investigation, which we chaired, focusing on eight institutions: Canisius College (NY), Illinois Wesleyan University, Keuka College (NY), Marian University (WI), Medaille College (NY), National University (CA), University of Akron, and Wittenberg University (OH). But as soon as news of this investigation was released, faculty members from a wide range of institutions contacted the AAUP’s staff with accounts of similar developments on their campuses, and news reports continued to pour in about the financial effects of the pandemic on other institutions. The crisis is widespread, and our report should be understood as illustrative rather than exhaustive.

What We Must Do

The best way to protect and preserve shared governance is through concerted efforts by your chapter on your campus. This work is not quick or easy, but it can be effective, and the consequences of not doing it are dire.

That’s the conclusion of the special report we are releasing today: COVID-19 and Academic Governance.

It’s time for a reckoning. So said Representative Ayanna Pressley at the campaign launch of the New Deal for Higher Education yesterday. 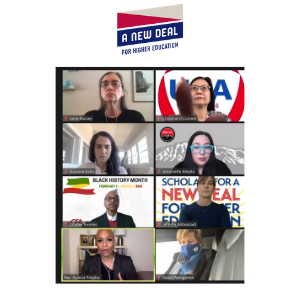 In a rousing kickoff, Pressley, Senator Elizabeth Warren, and other panelists talked about dreams achieved through higher education, but also the darker side of dreams deferred and a system of entrenched inequality. Jennifer Mittlestadt from Scholars for a New Deal for Higher Education described how the COVID-19 pandemic turbocharged existing inequities, deepening the austerity model that has gutted public higher education and hurt so many faculty and students through cutbacks, underfunding, and crushing student debt.

But with challenge comes opportunity. The answer proposed by all the speakers at the launch was clear: create a just, bold New Deal that returns colleges and universities to a gold standard of serving the common good.

Check out the resources on our New Deal for Higher Education site. While you’re there, take action. Add your name to a letter calling on Congress to pass the American Rescue Plan.

Higher education can and should be an engine of social mobility and a profession worth joining, as AAUP president Irene Mulvey said at the launch event. As part of this campaign, the AAUP is partnering with the American Federation of Teachers, the Roosevelt Institute, and Scholars for a New Deal for Higher Education to call on Congress to act now.

Here’s what we believe a New Deal for Higher Education can do: it can reauthorize the Higher Education Act and create other federal policies that establish dedicated public funding streams and hold administrations accountable for how those monies are spent. This campaign will advocate for:

The reckoning is underway. You can access a campus toolkit, read some excellent articles, and join the fight here. Check it out.

Election Day has passed, and, as predicted, we are still awaiting the outcome while states continue to count ballots.

The outcome of this election could have a profound impact on our nation, our local communities, and our campuses. The next days and weeks may be challenging for all of us. They have the potential to be especially difficult for students and colleagues of color, as the higher education community grapples with what a potential Trump second term could mean for the movement for Black lives and for the rights of international students and faculty. I urge my fellow AAUP members to stand in allyship with these members of our campus communities.

I have never seen the kind of voter engagement and get-out-the-vote efforts that we saw in this election. Even in the midst of a highly infectious and deadly global pandemic, we found creative ways to organize and to work collectively. I am so appreciative, in particular, of the voter registration drives and get-out-the-vote efforts targeting younger and first-time voters that took place at colleges and universities all over the country. Your efforts resulted in massive early voting and record high turnout.

In the short term, it is essential that we ensure that vote counting continues. The democratic process must be allowed to play itself out and all states must be allowed to finish their vote counts. We need to call out and resist the president and his surrogates when they make false claims of voter fraud or falsely declare victory.

In the longer term, regardless of the outcome of the election, we must channel our engagement into real activism on our campuses and in our states as we continue to struggle with the impact of COVID-19 and to push back on the decades-long public disinvestment in higher education. We must continue to stand firm for academic freedom and for the role of science and expertise in shaping public policy—in truly serving the common good. We must continue to fight for economic security for all those who teach and research in higher education, and for all campus employees. We must continue to fight to ensure a more socially just society and a more socially just academy.

Thank you for your hard work—for voting, for volunteering, for organizing. For continuing to demand the best of our nation.

As many faculty have begun a new term, we continue to work to provide everyone with guidance and trainings to help navigate these difficult times. Check out our upcoming webinar, a newly announced investigation, and updated campus opening guidance below.

On Thursday, October 1, at 2 p.m. Eastern time, we will host a webinar for AAUP members providing an overview of recommended AAUP-supported standards on financial exigency and program elimination that should be included in faculty handbooks and collective bargaining agreements, with a particular focus on financial exigency and the COVID-19 pandemic. The webinar will be led by Hans-Joerg Tiede, a senior program officer at the AAUP, and Mark Criley, a professor at Illinois Wesleyan University. Note that this webinar covers much of the same material as the financial exigency webinar held in April 2020. RSVP here.

The AAUP has authorized an investigation of the crisis in academic governance that has occurred in the wake of the COVID-19 pandemic, with a focus on seven institutions: Canisius College (NY), Illinois Wesleyan University, Keuka College (NY), Marian University (WI), Medaille College (NY), National University (CA), and Wittenberg University (OH). Given the comprehensive nature of the undertaking, the investigating committee may decide to discuss relevant situations at additional institutions. The report, to be released in early 2021, will reach findings on whether there have been departures from AAUP-supported principles and standards of academic governance, as set forth in the Statement on Government of Colleges and Universities and derivative AAUP policy documents, but it may explore other issues as well, such as the effects of unilaterally imposed mass layoffs on academic freedom and tenure, the enrollment and financial challenges facing many institutions, and the impact of these challenges on higher education, especially the humanities and liberal arts. Read more and watch a Facebook Live with the co-chairpersons of the investigation here.

We have updated our guidance on reopening and operating campuses during the pandemic to include recent developments.

Last week, Academe published several online articles, including a new series of “pandemic reflections” by faculty members and AAUP activists, in a preview of our forthcoming fall issue on the COVID-19 crisis. Visit Academe online to read more.

An Invitation from Academe Blog

Colleges and universities around the country have approached the fall term in a variety of ways, and those approaches are constantly evolving. Whether your institution is holding classes in person or online or using a hybrid model, Academe Blog welcomes submissions from members about the challenges of teaching and engaging with and supporting students—and about other faculty concerns—during the ongoing pandemic. See submissions information here.

We’ll be in touch with another COVID-19 update in October. Stay strong, stay safe.

The American Association of University Professors has authorized an investigation of the crisis in academic governance that has occurred in the wake of the COVID-19 pandemic, with a focus on seven institutions: Canisius College, Illinois Wesleyan University, Keuka College, Marian University, Medaille College, National University, and Wittenberg University. Given the comprehensive nature of the undertaking, the investigating committee may decide to discuss relevant situations at additional institutions. The report, to be released in early 2021, will reach findings on whether there have been departures from AAUP-supported principles and standards of academic governance, as set forth in the Statement on Government of Colleges and Universities and derivative AAUP policy documents, but it may explore other issues as well, such as the effects of unilaterally imposed mass layoffs on academic freedom and tenure, the enrollment and financial challenges facing many institutions, and the impact of these challenges on higher education, especially the humanities and liberal arts.

Since March, the AAUP has received numerous complaints from faculty members detailing unilateral actions taken by their governing boards and administrations to dictate how courses are taught, to suspend key institutional regulations, to reduce and close departments and majors, to compel faculty members to teach in person, and to lay off long-serving faculty members. In most cases, the stated basis for the actions was the need to deal with pandemic-related financial shortfalls.

This investigation will be unique in the annals of the AAUP. The AAUP conducted another omnibus investigation in 2006 of mass terminations at five New Orleans universities following Hurricane Katrina, and in 1956 the Association issued a celebrated report, Academic Freedom and Tenure in the Quest for National Security, reviewing the attacks on academic freedom that had occurred at eighteen institutions during the McCarthy era. These investigations and reports, however, dealt with issues of academic freedom and tenure, not with issues of academic governance.

AAUP governance investigations are conducted under the aegis of the Association’s standing Committee on College and University Governance by AAUP members who have had no previous involvement in the cases under investigation. The investigating committee is charged with independently determining the relevant facts and the positions of the principal parties before reaching its findings. The committee’s draft report, if approved for publication by the parent committee, is distributed to the administration and the relevant faculty bodies for comment and correction of fact. The AAUP takes these comments into account when preparing the final report.

For more insight, you can watch a livestream discussion of the investigation with committee co-chairs Michael Bérubé and Michael DeCesare on Wednesday, September 23, at 3:30 p.m. Eastern time on our Facebook page. The video will be available after the stream concludes if you’re unable to watch live.

We will send updates on the investigation as they come.