Today, a narrow majority of Supreme Court justices sided with extremely wealthy interests in the long-awaited decision in Janus v. AFSCME, Council 31. Although this decision was not unexpected, we are disappointed by the opinion of the majority in this case, which seeks to undermine our freedom to join together to create better colleges and universities for everyone. Stay tuned for more information about the impact of Janus as we analyze the repercussions of this opinion.

You can find out about the background of this case at https://www.aaupcbc.org/together.

You may have heard in the news that this case is about being “forced” to pay union dues. But what it’s really about is an effort to undermine the voice of faculty at our colleges and universities and to diminish the rights of working people all over. The Janus case and similar court cases and legislative initiatives are part of a broad assault that seeks to erode our freedom to join together to ensure that our students have challenging learning environments and to strengthen our institutions of higher education.

But make no mistake, our fight as AAUP members to have a positive impact on our colleges and universities, to strengthen public higher education, and to protect academic freedom is not over. Together, we will continue to fight for our students, our campuses, and our communities. We will continue to say, loudly and clearly, that strong universities and well-educated citizens are essential to our survival as a democracy. That’s why our work as educators, union members, and advocates has never been more important than it is now.

Yesterday, the Supreme Court heard oral arguments in Janus v. AFSCME, an attack by wealthy, anti-union organizations on the voice of working people and their ability to negotiate collectively.

People from around the country rallied at the Court to let the world know that, regardless of the outcome of the Janus case, we will continue to organize for the public good and for our rights. This followed the Working People’s Day of Action over the weekend, which called attention to our rigged economy and the need to defend our rights at work. It marked the fifty-year anniversary of protests by Memphis sanitation workers and Dr. Martin Luther King Jr. against discrimination, low pay, and inhumane conditions that led to worker deaths. Share the graphic below on Facebook and spread the word. 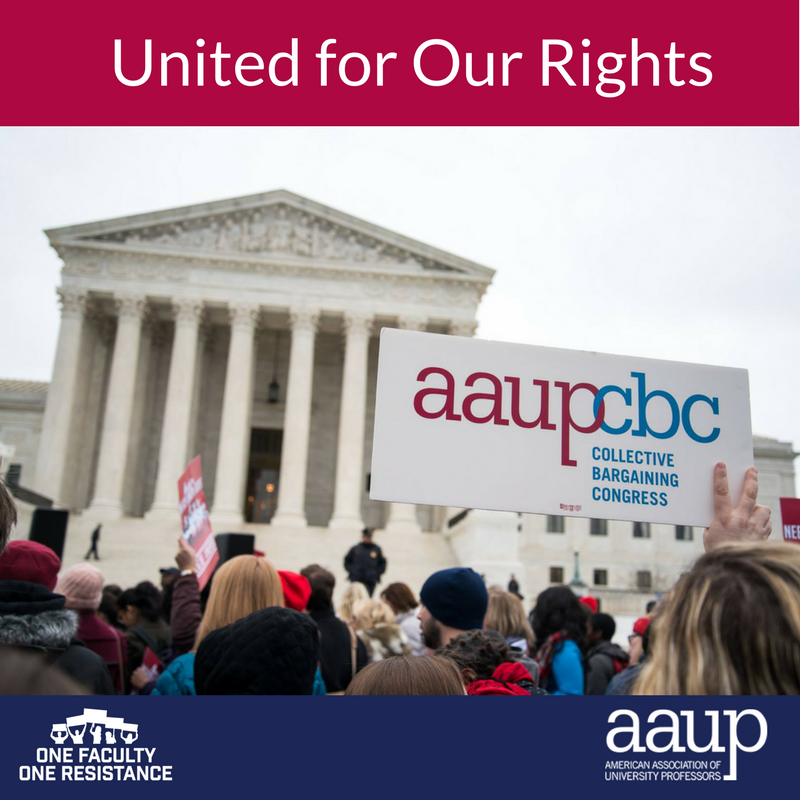 The AAUP supports the right of working people, including faculty, to join together in unions as well as in traditional nonunionized AAUP chapters. Our collective voice is a powerful force to set standards and create better workplaces. Together, we fight for higher education and the critical role it plays in this country. Together, we defend academic freedom, shared governance, and due process protections. Standing together also makes it possible for us to negotiate affordable healthcare, a fair return on our work, and the ability to retire with dignity.

At issue in Janus is whether non-union members, who share in the wages, benefits, and protections that have been negotiated into a collectively bargained contract, may be required to pay their fair share for the cost of those negotiations. Learn more about the Janus case and the amicus brief we filed.

Yesterday’s oral argument went largely as expected. Many of the justices sharply questioned the attorneys. Justices Sotomayor, Breyer, Ginsburg, and Kagan generally asked questions and advanced arguments that were supportive of the constitutionality of fair-share fees, pointing to their benefits and to the fact that unions and others had relied on the prior decisions of the Court. Justices Kennedy, Alito, and Roberts took the opposite approach. Justice Kennedy seemed particularly hostile, asserting that unions compel nonmembers to subsidize their political speech.

Because none of the justices appeared to depart from their expected position, today’s oral argument reinforced the view that the Court will rule against us.

AAUP members are sticking together as One Faculty, One Resistance to fight for our collective voice, to promote safe and challenging learning environments, and to defend the important role our universities play in advancing the public good.

Thanks for standing with us.

The AAUP has filed an amicus brief in conjunction with the National Education Association (NEA) in a case that wealthy, anti-union organizations are using to try to deal a “mortal blow” to unions.

The case Janus v. American Federation of State, County, and Municipal Employees, Council 31 is the latest legal threat to union rights and is part of a broad effort to weaken the power of working people, to undermine public services, and to erode the common good.

Together with our chapters and allies, the AAUP is continuing to organize to defend higher education as a public good. The brief we filed argues that fair share fees in public-sector unions are an equitable way to distribute the costs of collective bargaining among all who benefit.

Evidence shows that maintaining a robust collective negotiations system advances the public’s interest in providing high-quality public services. Studies included in the amicus brief clearly show that unionization in public schools and universities is linked to improved quality of education and of working relationships within educational institutions.

The Supreme Court will hear oral arguments in the case on February 26, 2018. A decision is expected by the time the Court’s term ends in late June 2018.

Continue to support our legal work in Janus and other cases. Donate to the AAUP Foundation today.